On Sunday, November 16, GCAT participated in the Guelph Community Santa Claus Parade. We knew that the parade was very popular with families, and we wanted to broaden our exposure to the community.  Since GCAT’s mission is to get more people interested in biking, walking and rollerblading, what could be better than participating in this fun community event?  Our theme was, “You can do anything on a bike”, and it’s true!

Initially, we were worried the cold weather would deter some participants from attending.  But attend they did!  We had costumes galore.  We had a bride, a chef, a French citizen, a woman transporting a dog, a skier, a dapper gentleman and lady, a cross country skier, a reservist,  a rollerblader,  and even a woman who looked like she just rolled out of bed!  And of course, no one will forget Mr. Canoehead!

The children along the parade route loved it!  Parents were reading out the signs posted on the bikes, such as, “Bike with your bride”, etc.  On a bike, it was easy to interact with the crowd, as there was ample opportunity to get close to the audience. We don’t know who smiled more, the children or the GCAT participants.
In the end, we won a parade award, called  “Best Walking Entry Award.”  We were thrilled because we weren’t expecting to win.  We hope you can join us for next year’s parade! 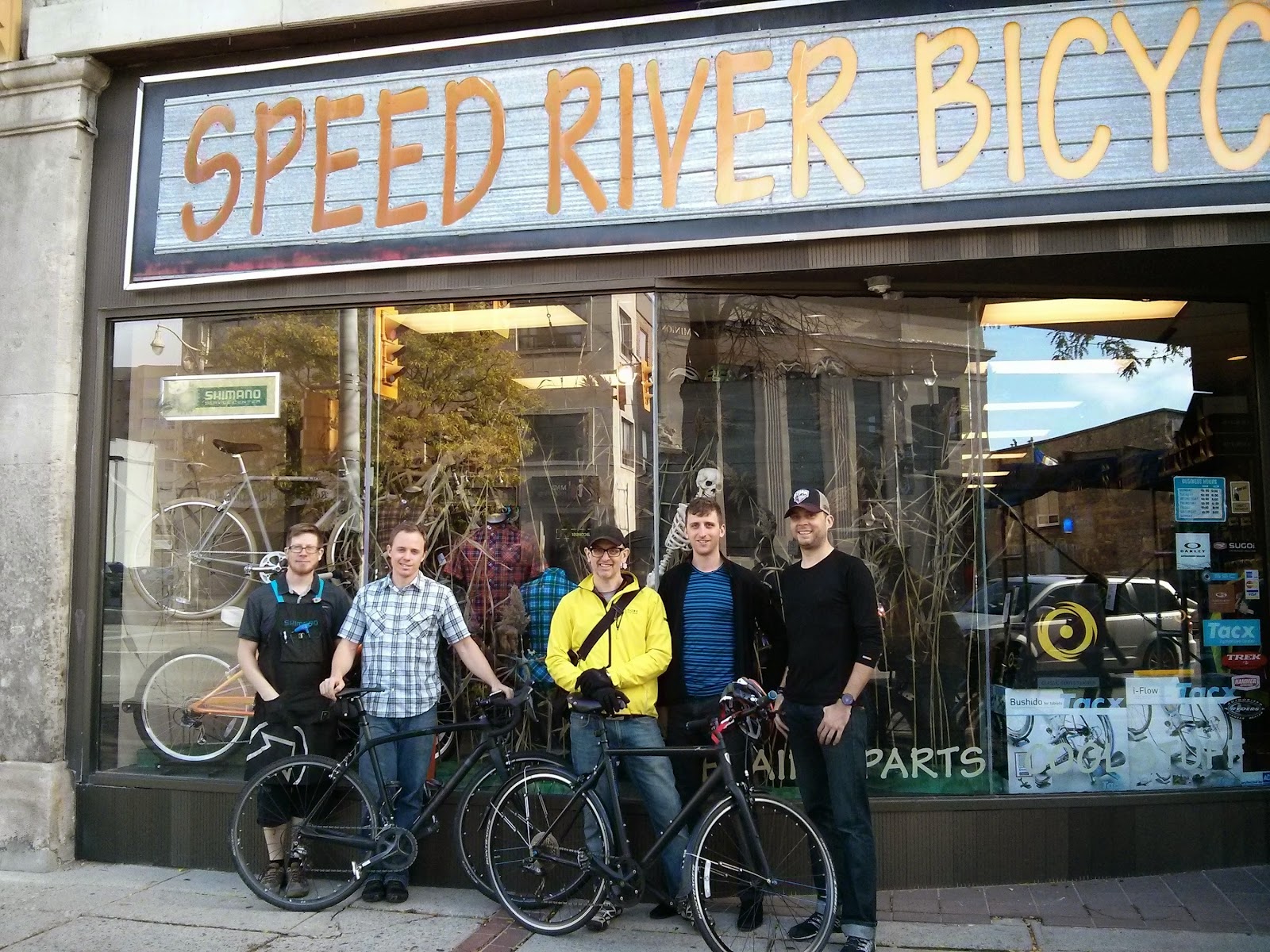 1)Why do you cycle to work?
Cosmo– Because I like to ride. I’ve always cycled.  I’ve never had a job where I didn’t cycle to work.  For me it’s habit. I don’t just do it because we sell bikes; it’s a lifestyle that we promote.  We deliberately bought a house downtown so that, as a family, we don’t have to rely on two cars.
Tim- Because its convenient,  inexpensive and  it’s what I’ve done for 12 years.  I don’t think about it, it is just what we do.
Cosmo:  Besides cycling to work, the whole staff goes on a group ride before work on Saturdays. The staff wanted to do this because it’s fun and it promotes camaraderie, and makes working together much easier.
2)What do you like about cycling to work?
Cosmo-Everything. It’s an enjoyable thing to do.  It wakes you up. The hidden benefits are cost savings.
Tim-I get to see the city at a slower pace and I see things that I never see in a car, like when I go over a bridge and enjoy the scenery.  I’m more involved with my surroundings.  I  know Guelph more than most because I ride around it. I see it, warts and all.  I can recommend things to our customers, such as, “Don’t take this route”, etc.  For example, while I recommend the Kissing Bridge trail as a great place to cycle, getting to the Kissing Bridge from Guelph by bike is very dangerous.
3)How would you respond to people who feel a car is just safer?
Cosmo: They’re wrong.  Bikes are safe. I don’t think that cars are safer. It’s the operator not the car or the bike. According to statistics, more people are injured in cars than on bikes.  I understand they feel safer because the infrastructure isn’t there to keep bikes away from traffic. The more people that are on bikes, the less cars that are on the road, the more room for people who just want to drive their cars. The people who don’t want to give up their cars should want bike lanes the most!
Tim-It’s perception. It does feel safer when you’re in a metal coffin. I can just recommend people try. Many more people die in car accidents.
4)What infrastructure change would make your commute better?
Cosmo-I’m pretty lucky because there are bike lanes to my front door.  However, I would make a better bike crossing at Eramosa Road. Where possible, I take back roads and avoid main streets.
I also benefit from bicycle infrastructure that has been completed. I have the choice of Woolwich Street with bike lanes or the Trans Canada trail.  I’m proof that they are being used.  And that it’s doable and easy.
Tim:Eramosa Road is a death trap. Worst road in existence.
That road is my commute. I’m beginning to feel more in favour of separated infrastructure.  Right now I have to ride in the middle of the lane in order to survive.
The area around Elizabeth Street and Victoria Road. There is a completely weird system where the Victoria Road bike lane goes over a bridge and ends on a 10 foot wide shoulder which could support bike infrastructure, but there is no infrastructure for bikes.
I would also like to have traffic lights that get activated by bikes.  As it stands now, I get tired of waiting for the light to change and eventually i just ride through.
5)What needs to happen in Canada to make the culture, and eventually the roads, more bike friendly?
Cosmo– We need more bike lanes. We need to change people’s attitudes towards reliance on cars.  With increased density in Guelph, fewer people will rely on cars.  We need to  convince people that if you dress properly you can commute at least 10 months of the year.
Tim:  Cycling is  a mode of transport. You don’t have to be a “cyclist” to get on a bike.  It doesn’t have to be a bunch of “wahoos” wearing spandex.  As well, there has to be equal facilities for foot and bike at each end of someone’s journey.
6)What advice would you share with a new bike commuter?
Cosmo: It doesn’t need to be complicated. You need a good reliable bike and basic equipment and you can bike year round. Don’t be afraid to try. Oh yeh, you need to keep enough air in your tires!
Tim-have the proper clothing and lights. It will save you a lot of discomfort.
7)What kind of bikes do you ride?
Cosmo: I have the new Trek 9th district city bike. A few gears, all black, nondescript. Boone Cyclocross bike is my “sports car”.
Tim-I ride the Boone Cyclocross. I use it as a commuter and for recreational rides. I also have a Farley fat bike because I will be pulling my son all winter.  I decided to go as safe (and ridiculous) as possible. 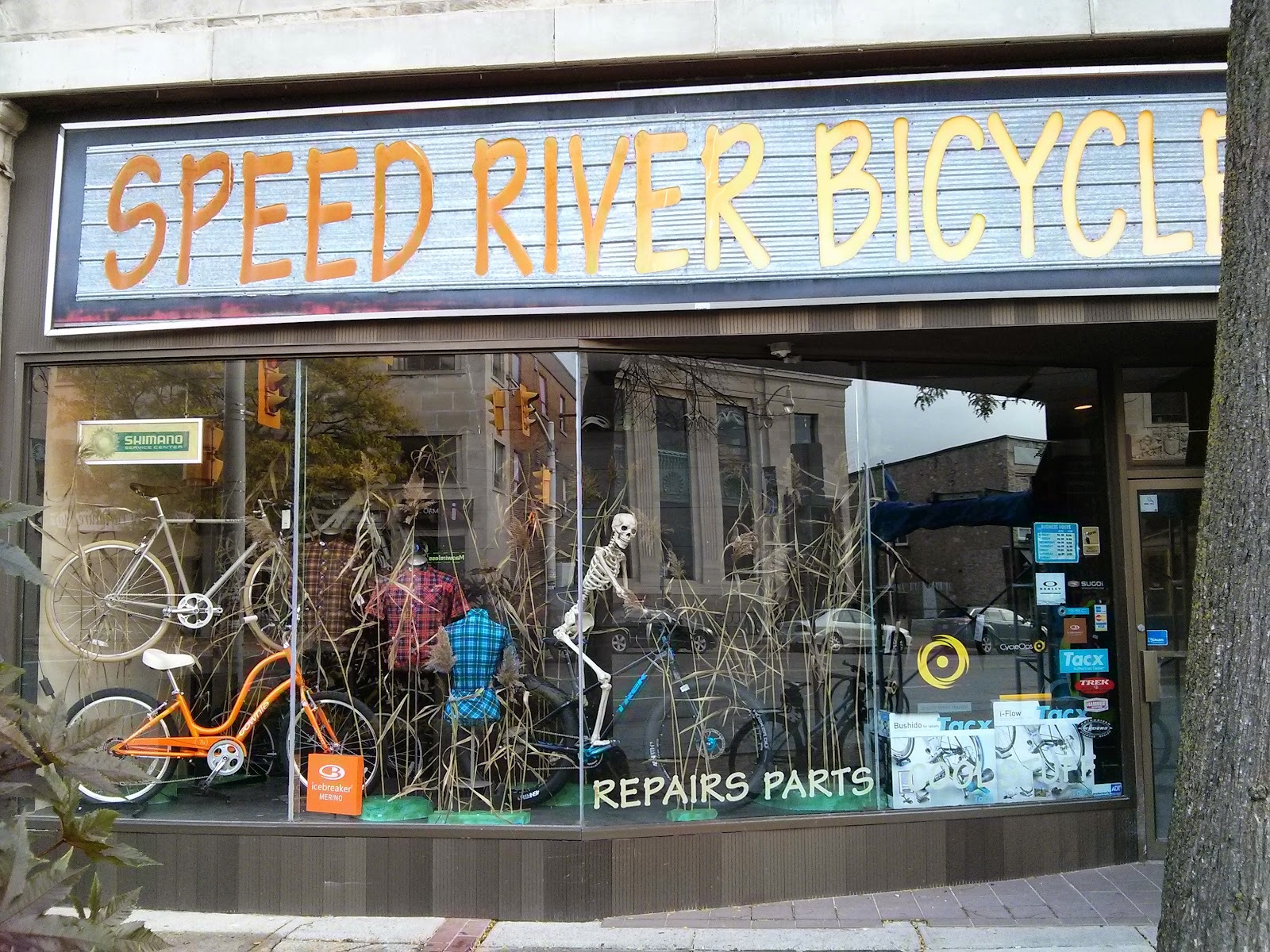