The Active Communities Pledge ( http://www.activecommunitiespledge.ca/ ) a is a province-wide initiative being organized by the Share the Road Cycling Coalition, asking municipal candidates to support measures that would improve access to active transportation infrastructure, provide more opportunities for residents to learn how to ride a bike safely and legally and support programs designed to encourage more residents to walk or bike more often.
All across Ontario, communities are seeing the benefits of investing in active transportation. Communities that are more walkable and bikeable have higher retail spends, higher land values, stronger talent retention and healthier, more active residents. Additionally, communities that are investing in active transportation are becoming tourism destinations, garnering a piece of Ontario’s $291 Million per year cycle tourism industry.
We also know that support for investments in active transportation infrastructure is very high. In a 2014 survey, 68% of Ontario residents agreed that government should invest more in creating active transportation infrastructure. 66% agreed that getting more people on bikes helps everyone in the province, not just those who ride themselves.
So GCAT has requested that municipal candidates submit their pledge at http://www.activecommunitiespledge.ca/pledge-candidate.phpand commit to making Guelph a safer, more comfortable place to walk and bike, and to help create a healthier, more prosperous community for the next four years.

We will publish the names of those candidates who have taken the Active Communities Pledge in another blog post in a few weeks. Stay tuned! 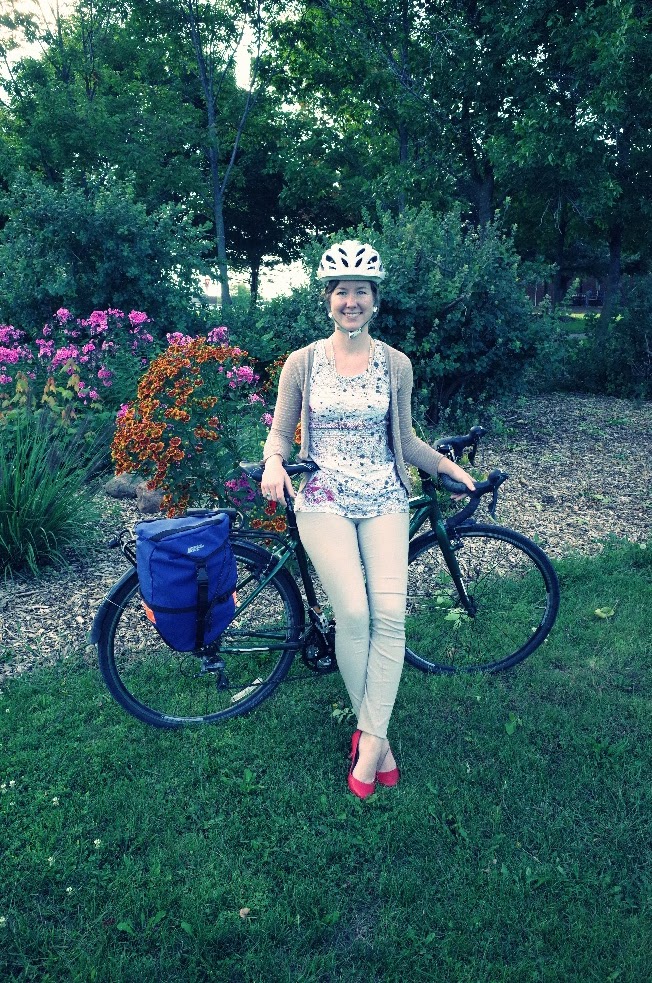 Tell us a little bit about yourself :
I first came to Guelph to do a Bachelor of Science at the University and fell in love with the city. In 2006, a year before graduating, I was hired by the City to start the TDM program.  The Cycling Master Plan started off as the “Bicycle Friendly Guelph” initiative.  We did a survey of best practices of cycling infrastructure around the world where there is a high number of people cycling in the community.  From these best practices we came up with the 5 E’s–education, enforcement, engineering, encouragement, evaluation.
In 2009, I returned to school to do a Masters in urban planning from McGill University. As well, I was fortunate enough to spend a year in Strasbourg France.  Strasbourg is France’s #1 cycling city, which gives me a great perspective in what great cycling infrastructure could look like. When I returned to Guelph in 2012, I continued preparing the Cycling Master Plan. I was happy in February 2013, when the Guelph Cycling Master Plan was passed almost unanimously by City Council.
Why is riding a bike important to you?
To me, it’s a very enjoyable way of getting around the city. I can appreciate my community. I can see things in my neighbourhood, I get exercise and I feel great when I get to my destination. I am also concerned about climate change and want to do something personally to help reduce our greenhouse gas emissions.
How has it changed your life?
I’ve been cycling since my undergrad. I grew up in a suburban community in the GTA where I was totally dependent on my parents for getting around.  When I was a student, I noticed that it was so much more efficient to bike than to walk or take the bus.  Now, I won’t go back to living a life of car dependency.
I’ve made decisions about where I live by whether or not I can shop and get to work by bike from home.
Where do you go on the bike?
Everywhere!  I’m more of a utilitarian cyclist.  I don’t do big long rides in the countryside but I use my bike to do ordinary things like run errands, visit friends, go for a drink with friends.  I also try to go to meetings by bike: I found that breaking up my day by getting exercise allows me to be more focussed.  It’s a little pick me up in the day.
When do you use the car?
My parents live 2 hours away and there is no bus access so I have to drive.  In town, I use the car when I take big weekly grocery trips.
What is the hardest thing about using the bike for transportation?
Winter! Winter is pretty tough.  I don’t have the luxury of having multiple bikes and my bike is not made for winter situations.  I walk in winter.
Were there fears you had about city cycling in the beginning that have been disproved?
I had the opportunity to shadow the CELP (Community Environmental Leadership Program) when the participants learned city cycling skills.  It was transformative for me. There are a lot of rights I didn’t know I had and I learned to own my space on the road.
Do you find yourself trying to convert non-cyclists or recreationalists to give bikes a try?
Yes.  It is my job!
What kind of bikes do you ride?
My bike is a Trek Cross Rip.  It’s a hybrid cyclocross bike which is perfect for commuting occasional trails and long distance road trips. I have a rack so that I can add my panniers. The bike is lightweight and manoeuvrable.  I love it.  My back-up bike is a vintage 1972 racing bike, steel frame and I just keep it tuned up.
How would you respond to people who feel a car is just safer?
Well, if it comes down to a competition between a car and a bike, a car will win. But, it’s also a question of a tipping point: Once we see a critical mass of cyclists on the road, drivers will pay more attention.  Right now there is a lack of awareness and motorists don’t see the cyclists.  Also, cyclists need to follow the rules of the road so as not to do anything unpredictable to put themselves in danger. 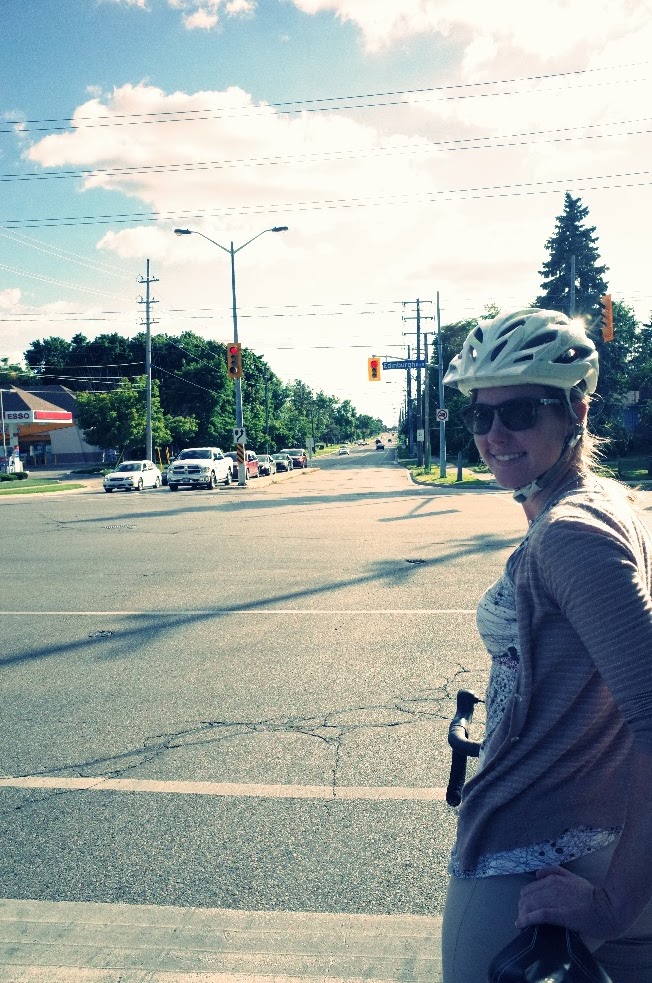 What needs to happen in Canada to make the culture, and eventually the roads, more bike friendly?
I think we need to stop thinking of cyclists as vehicles. They are A stand-alone category. They don’t look like vehicles or act like vehicles and they aren’t insured. It isn’t fair to put them on the same playing field as a machine that weighs 2 tonnes and goes 80 km per hour. In future, I hope cities will see that the safest place for a bike is off the road.  As well, intersections are key.  Copenhagen gets that and they have created a cycling highway (link http://gas2.org/2014/08/11/copenhagen-cycle-snake-elevated-highway-bikes/).
I also think that we need to be less afraid of the exercise aspect.  People overestimate how difficult it is to bike.  Everyone should give it a try.
What is the best part of your commute?
I usually use my commute as an opportunity to meditate.  I reflect on the things I’m grateful for and to appreciate our community, the seasons, the weather…  I have even learned to love winter! When driving a car, you can’t liberate your mind to appreciate these things, because you have to be so concentrated on traffic and many other things.
What is the worst part of your commute?
Unforeseen downpours, when I don’t come to work prepared for them!
What infrastructure change would make your commute better?
There’s a place in the city where I have to either carry my bike down a flight of stairs or illegally cross at an intersection. Neither option is ideal.  Bike tracks on the stairs would help.  (I’ll try to make it happen!)
What bit of advice would you like to share with new bike commuters?
You don’t have to special gear. I often bike in heels and a dress. I usually plan my route to avoid hills.  Check out guelph.ca/bike (http://www.guelph.ca/bike) and inform yourself of the rules of the road, your route options, and other useful information.  Once you know your rights, you will be more comfortable and confident on the road.
It’s always a good idea to have an extra bus ticket with you because if you don’t feel like biking home, you can just put it on the front of the bus. 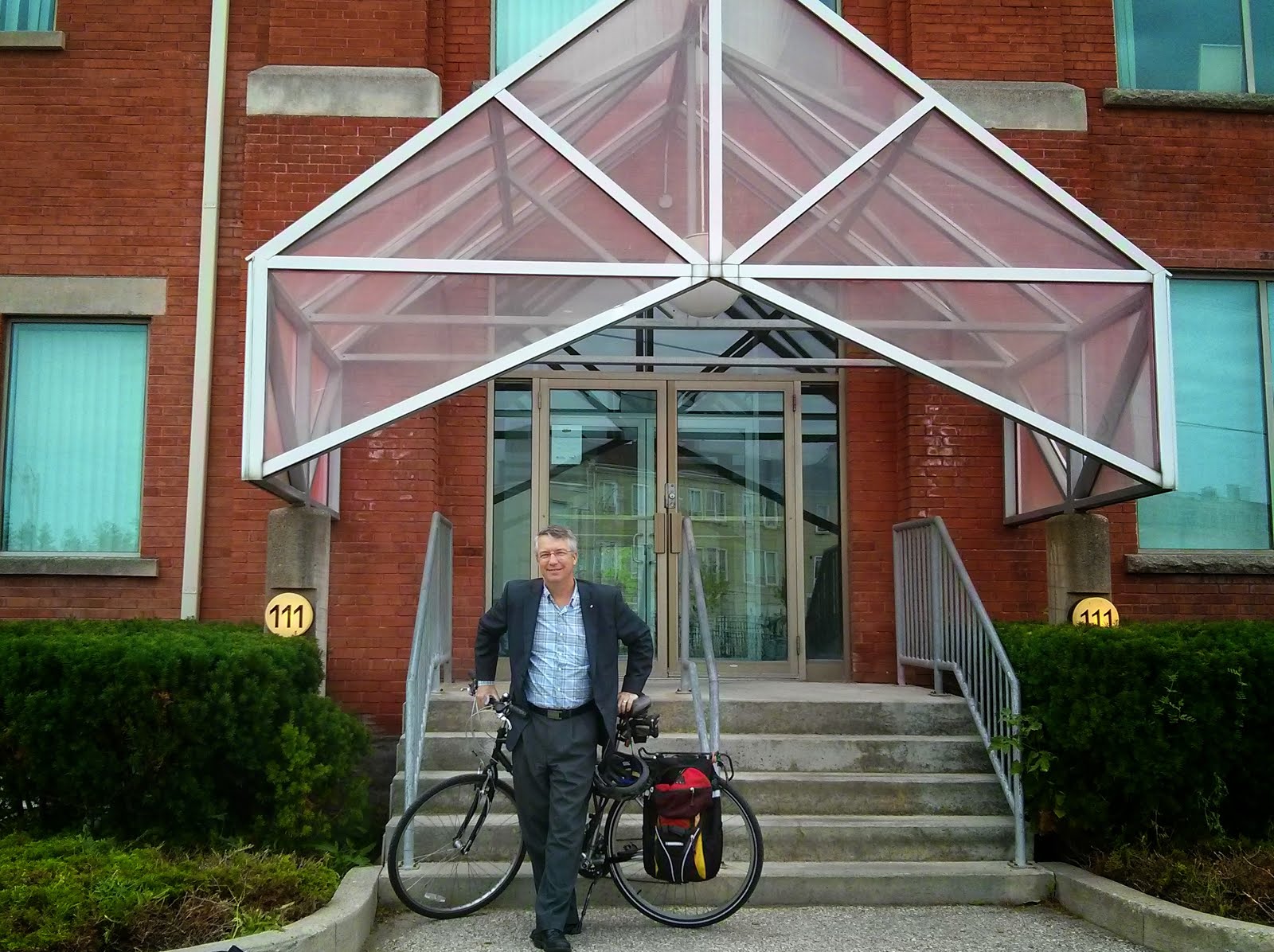